The Thursday is a bit of a warm up day and we needed it on this bit of a cool, overcast afternoon.

The Mall Stage is the only main stage running early on today but several cafes, restaurants and the hotels start to roll as the day progresses.

P.J. O'Brien, Christina Crofts Band, Dreamboogie, and Dave Hole was where you would have found us but an afternoon aperitivo found us at The Beachside Pavilion listening to some music from Melbourne  duo Diamonds & The Blues.

Two of the other main stages The Surf Parade Stage & Kurrawa Park Stage open up today (Friday) to some fine music...

Day 2 starts with some recommendations from fellow ABARAC contributors who met at Sage cafe near the Surf Parade stage while Toni Swain band was playing...Colin mentions Daniel Champagne as well as Dave Hole; Gary liked Dave as well but was taken with Christina Crofts band who he had never seen before; and Derek, all the way from WA, liked 19-Twenty out of the those artists on offer yesterday!

Inspirational acts of Friday were the always solid PJ O'Brien Band; Justin Yap Band on their first venture over into Qld territory; Dave Hole puts in wonderful effort on the Surf Parade stage as does Hat Fitz and Cara with the help of a 10 piece gospel choir from Brisbane and Ash Grunwald with his stellar band made up of members from the Living End, Bullhorn, Wolfmother and Tijuana Cartel  ends the night with a mighty audience in attendance.

Also on some of the other stages artists of note...Blues Arcadia on the Kurrawa surf-side stage; Jimi Beavis; Dezzie D and The Stingrayz; and Lloyd Spiegel all on the Mall Stage. I have yet to venture around to the Oracle Boulevard stage but might see what's on offer there today.

So much good food and drink at all the local cafes and restaurants who have done a great job in preparing for this rather large influx of people for the weekend. Nothing beats sitting in the sun on a cool Autumn day, eating and drinking andlistening to some great live music...this is the life!

Headline act - Robert Cray on the Surf Stage on Sunday

See more photos from the Festival on my 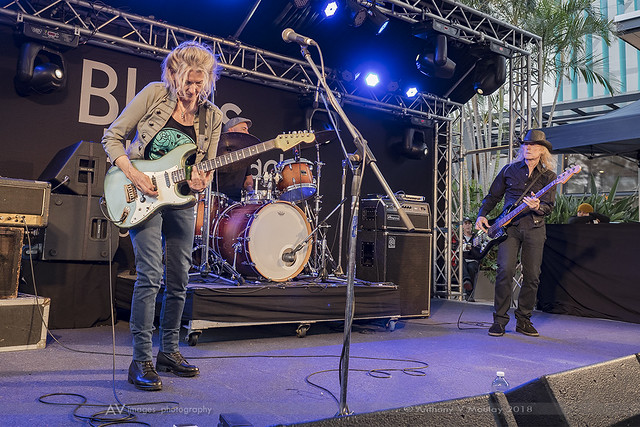